A Dog Did It by Brain Cooke 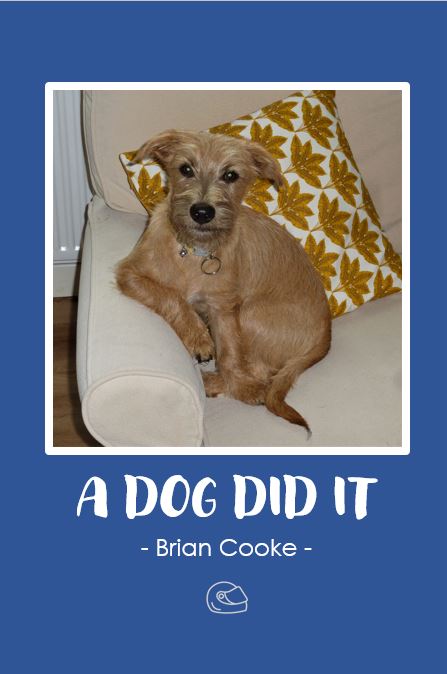 What Brian said after reading his memoir...

“I’m over the moon about it. You’ve done a really good job. I couldn’t be happier.”

“I’ve enjoyed learning how to be a better writer.”

How I wrote Brian's memoir

When Brian saw my advert in the local paper, we were deep in the second lockdown. But it was just what he was looking for because he’d recently finished writing the first draft of his memoir. This had kept him busy all through the dark days of shielding and distancing. Brian is a very sociable person, I realized as soon as I started editing his manuscript, so I felt sure the pandemic would affect him in lots of ways. Also, the day I started work on his book, Brian started treatment for cancer at the Christie Hospital.

The manuscript was 105,000 words when it came to me, but after Brian had rewritten sections, and added in important people in his life, it ended up as 127,000 words! That’s the longest book I’ve ever done, at over 430 pages. Brian was keen to keep the project moving, as he had fears for his mortality, as we all do these days, so I made him my sole client from November to March.

Brian delivered 300 photos for me to scan, of which I used 250 in the book. I restored and repaired most of them as few had been preserved in an album.

The book reads really well now, and I’ve enjoyed this project particularly because I’ve been able to teach a student how to be a better writer, rather than just rely on transcripts.

An excerpt from Brian's memoir

A lady walking past me said, “What’s that on your legs?”

I replied with no hesitation at all. I was very confident that what I had just said was actually plausible. Being a four year old, I had never admitted to anything that couldn’t possibly be true. Never mind that I had just told one heck of a porky pie.

This was the day of my first Christmas party at Devonshire Road Infant School, and it was 1952. My mother had helped me get dressed that morning. For some unknown reason, she had put braces on my short trousers.  She had fastened them by buttons to my trousers and then put a jumper over the top of the braces.  I had never had braces on my trousers until that day, although my father wore them all the time to keep his long johns up. For me it was a first, but I had no suspicion what this would mean later in the day.

Now fast forward. All my school friends were celebrating the well-known carpenter’s impending fatherhood. All the kids were in the school hall, sat cross-legged on the floor waiting for the party to start. They had sung some carols, and were all getting excited about what exactly awaited them at their first ever school Christmas party.  In the meantime, they munched on butties with the consistency of slightly damp, bleached, white cardboard. The butties contained a fishy-smelling spread, a type of salmon, if I remember correctly. I think it is still available in the shops in little glass jars, if you want to have a taste of it.

I too was sitting cross-legged, just absolutely dying for the singing to start.  At that moment, however, I started to feel that I could probably do with a visit to the toilet to have a ‘number two’.  So I stuck my hand up, in the air that is. I didn’t know until many years later that there were much better places to stick one’s hand up.  That was thanks to a number of girls coming to Blackpool on holiday, most of them wanting to kiss the local boys hundreds of miles from home.  Anyway, that’s for later in this story. I was starting to feel a little uncomfortable.

“Miss, can I go to the toilet please?”

The teacher had no idea that I didn’t just want a pee. I wanted a poo.  Okay, I thought, I’m not desperate at present. So I decided to sit tight aaaannnnd relax.  My body a few minutes later, though, had decided on a different agenda, a very different agenda.  So I asked again.

“Miss, can I go to the toilet please?”

“Brian Cooke, please be quiet. And no, you can’t go to the toilet. So sit there quietly!”

Okay, it was time for action, as my bodily functions were soon going to outmanoeuvre the teacher, poo to one, so to speak.  I decided to slink off to the toilets, but I mentioned it to one of my fellow pupils en route.

“I’m going to sneak out, as I need to go off to the toilet for a tom-tit. I’ll see you later, John.”

So here I was now, in a school toilet cubicle about to drop my pants to do the biz.  Aaarrrrggghhhh, oh no!

“What are these things holding me kecks up?” I said out loud and in frustration.  I really wanted somebody to tell me the answer and give me a solution to my problem, but I also knew that absolutely nothing would be forthcoming. There were braces holding my pants up!  How did these come off? Obviously by this time I really was in a hurry to get my kecks off. Having a jumper on top of my braces, I had no idea at all how to get the bloody braces off or undone. My bloody jumper was in the way.  Mum had omitted to give me a braces-undoing lesson before sending me off to school. So here I was with these things handcuffing my kecks to my body.

Well, my body decided it had waited long enough, and I just had to let nature take its course. There was no point in sitting down.  Think about it!

For some reason, my parents had never introduced underpants into my attire.  My dad wore long johns underneath his trousers, but thank god I had never got long johns introduced to me. I would have looked a right dick with those under my short school trousers. A few moments later, my classmate John came looking for me in the toilets.

“Are you in there, Brian? Are you okay?”

“Tell the teacher I’ve pooed my pants, just tell her that, John.”  Pretty colourful,  and without any thought of my pal going back to the teacher and repeating anything but this classic line.  So John sauntered up to the teacher in the school hall with an obvious look on his face of wanting to tell the teacher something.

“What is it now? What do you want?” she said, spotting John coming back into the school hall. “And where has Brian Cooke gone? Do you know, John?” So John told her.

“Oh, he’s in the bogs and he asked me to tell you he’s pooed himself.”

“Okay, thanks John, I wondered where he was, ok no problem, cool.  Now sit down and be quiet.”

This was a typical conversation between a four year old and a cool, infant school teacher who really didn’t give a toss.

So, what to do now? I set off out of the toilets looking a bit of a mess and headed towards the one school gate that was always open. You know, the one that nobody was ever allowed to use. Does every school have one of these bloody gates? I suppose the school-gate-mafia, or another piece of European health and safety legislation, or some control freak on the school council had decreed it?

Just outside those gates, I met a woman who asked me the poignant and aforesaid question.

“What’s that on your legs?”

She seemed puzzled at my reply, and my utter conviction about the answer to her question.

“A dog did it,” I blurted out to her, thinking quickly.

“What?” she replied in a high-pitched, surprised and totally perplexed voice.  Her reply had hidden meanings, and questions.  Perhaps she wondered how a four-year-old boy came to have such a mess on his legs. I did have what appeared to be some poo on my legs, but I was blaming it on a dog. Well, even a four year old would not want to admit to this self-inflicted mess.  Luckily, that was the first and only time I was asked that question on the rest of my journey home. Other people I passed had more sense.  Some looked at me and, I assume, avoided me at all costs. Some even crossed the road. Well, what the hell would you do?

Mum was none too pleased when I got home.

“What the heck happened to you? Why are you in this dreadful state?”

This whole episode ended with my mother writing to my teacher. In her letter she gave my teacher a piece of her mind about not letting me use the toilet when I obviously needed to.  She inadvertently omitted to write anything about the braces that played the most important part in the incident.