Clever in my Own Way by Norman Gresty 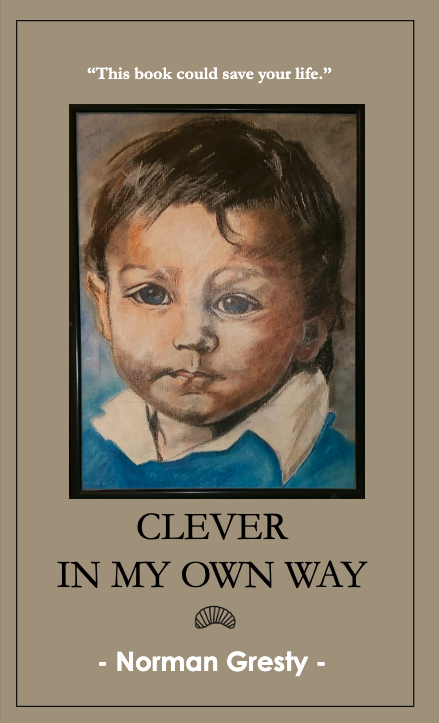 What Norman's friends said when they read his memoir...

“I enjoyed reading it, and so did my wife. By Christ, Norman had it a lot rougher than I thought.” – Norman’s friend, Fergus

“I’d only had it a day, but I finished it all in a day. I couldn’t put it down. It’s absolutely brilliant! The best book I’ve read. I’m absolutely amazed. It’s wonderful! I can’t believe how good it is.” – Norman’s neighbour

What Norman said when he read his memoir...

“I’ve read it five times. Now it’s always there for other people. I try to inspire people. They never bother with them that’s at the bottom, only the top ones.”

“I can remember everything in that book, and you can’t do that if you’ve made it up. My brother said I had a marvellous long-term memory. And I’ve always been able to express myself.”

“I had to talk about some painful memories for this book. They still upset me but I’ve had to get over it. All the witnesses are dead now though, and them that’s alive have got dementia or they’re on callipers. You’ve only got to kick their sticks away and they’re dead.”

“When I show my book to people, they burst out laughing when they hear my stories. ‘You’re a rum sod,’ they say. Half of them can’t believe, who read it. I can’t believe it myself sometimes, what I did. I’ve sold about fifteen books now.”

An excerpt from Norman's memoir

Sometimes local people would complain about the smell from my maggot farm. What they didn’t realise was that I’d cleared out every farm in Derbyshire within a 60-mile radius, and I was doing a public service. It was an unwritten contract that I’d take everything they had from the big chicken factories, even if I didn’t really want it. I took from Thornhills and also from Dove Valley, which was the biggest factory in the country with 100,000 chickens. They couldn’t sell a bird with an abscess or a scar or with half its arse pecked off, and many of them died every day. They’d get picked up on a daily basis and thrown in a skip. This continued all through my quiet season in the winter when I only bred maggots for leisure fishermen, not the huge numbers of competitive anglers. Our deal was that I’d take it all if they brought it, and I didn’t have to go and collect it.

Other days I’d go and collect their dead chickens for them, and on one day I collected 60 tons! That disaster was because they’d had the bright idea of employing no maintenance men at the weekend. It was their job to keep the fridges gassed up, and the temperature down. So one day the fuses went and the fridges turned off, and all the capons went bad. And in the barn the lights all went off, so the hens stampeded to the only chink of light there was, by the door. They all piled on top of each other and suffocated. The farmer had to get rid of them quick, before they turned to jelly.  They wanted someone to remove them immediately, someone they could rely on. Every time they had a disaster at Number 27 farm, for example, I’d get the bodies off the premises.  At Christmas I always gave them a bottle of whisky and a bottle of vodka for the office party, and I’d even dress up as Father Christmas. So they liked me.

Sometimes I’d go to Liverpool and collect fish. It was mainly heads and tails or guts, although occasionally there’d be a glut of fish from the docks when three ships had come in at once because the weather was bad. The wholesalers had to accept it, but they wouldn’t have room for it all in their fridges. (Cod fish in those days used to be much bigger – about six-foot-long, with heads as big as a football. These days they’re only about two-foot-long because of all the over-fishing.) So they’d call me to dispose of it, all perfectly good fish. If I didn’t take it, then the pigs or the bone merchants would have it.

I was once going down a cobbly hill with five tons of chicken innards on board. There were livers, kidneys, and guts about eight metres long. They were like a porridge. When I braked, the whole load moved to the front. And started to ooze. It was icy that day so when I braked going down a hill I started to slide across the road, even though I was only going 7 mph. I skidded right across to the other side and hit the kerb. The innards all slurped together like a soup and spilled all over the road. It’s greasy stuff, and if I’d tried to clear up, the innards would just have slipped off my shovel. So I made a quick getaway in case anyone saw my number plate. If the police had turned up, they’d have thrown the book at me. Then a taxi came round the corner, and skidded on them too. When I looked in my rear-view mirror, I could see some of the innards going backwards and forwards on his windscreen wipers.