Finding Faith and Love by Ray and Joan Probart 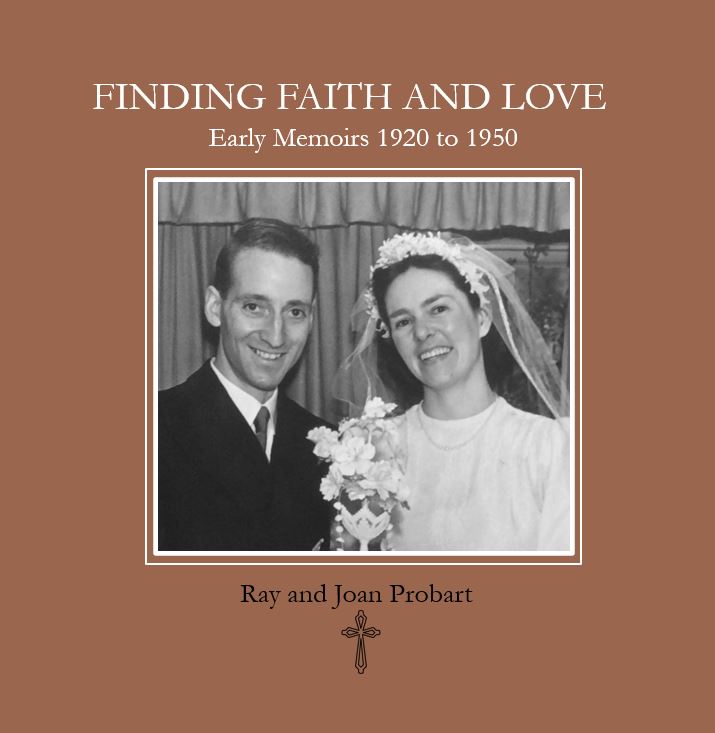 What Ray's son-in-law said after reading his memoir...

“It’s been a real pleasure working with you. Huge thanks for going the extra mile, and for your superhuman efforts.”

How I wrote Raymond and Joan's memoir

Raymond’s son-in-law contacted me about a month before the big 100th birthday. He had short manuscripts written ten years ago by both Ray and his wife, covering their childhood memories. These were memories of the 1920s and wartime, so naturally I was very excited to read them.

Not only that but Raymond’s wife, Joan, had kept several albums of photos from her early days. And even better, they were all labelled and dated. Very unusual, but then it was uncommon to have a camera at all in those days, so the pictures were precious and had been well cared for. Sadly, Joan died several years ago, so I never got the chance to meet her and ask about her time in the Wrens. She sounded quite a gal!

This was the quickest I’d ever put a book together, and not only that it was a complete redesign of my standard offering. So now I can offer a 25 cm square ‘coffee table book’ for clients who have lots of good photos.

Raymond was delighted when he saw his memoir and maybe it will inspire him to remember memories of the rest of his life.

An excerpt from the memoir

When I was in the Wrens, I had a few exciting moments, such as the thrill of going on a test flight in the Captain’s Tiger Moth after I had done the necessary work on the engine. As it was a dual-control plane, I was allowed to take the controls briefly!

On another occasion, I was in the cockpit of an Albacore, having started the engine, when someone came running out of the squadron office with a fire extinguisher. There were flames coming out under the fuselage! After starting the engine, the Koffman starter cartridge had caught fire. I shut down the engine and made a quick exit!

One day several of us were asked if we’d like to go on a practice dive-bombing trip to a small rocky island offshore. Of course, we said, “Yes!”  Three of us stood in the rear open cockpit of a Swordfish aircraft, secured by snap links and straps to the floor, and with parachutes attached (although we hadn’t been told how to use them).  As we dived down on the target, we felt as though we were being sucked out of the plane, but as soon as it pulled out of the dive we crumpled onto the floor as a result of the g-force. Some trip!

When some Americans came over from a nearby base for a beach picnic, we had another ‘first’, fried chicken legs, which was a real treat for us. There were many lovely beaches near St Merryn, which we visited as often as we could in the summer. Because of rationing, swimwear was virtually unobtainable, so some of us fashioned nifty numbers out of our standard issue blue woollen bloomers!