Me and Me Mam by Sheila Gerrard 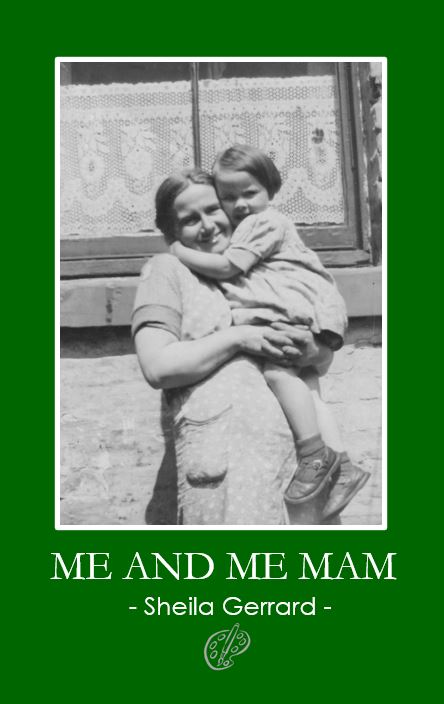 How I wrote Sheila's memoir

Sheila’s friend saw my advert in the local paper the same day that Sheila had told her about a desire to write her life story. It seemed such a coincidence that she phoned me straight away. We got down to work the week before the first national lockdown, and I scanned all her photos in the initial meeting. I’m so glad I did – I wasn’t able to visit Sheila again for many months.

We did all our interviews over Skype, once Sheila had fixed how to use her iPad. It was worth all the fuss though, because we managed to get some really nice material. In addition, Sheila started writing things down on paper. This sounds simple, but the writing was done on old notepads, old notelets, backs of envelopes, any paper she could find in the house. She then she had to get it in the post to me, only she was shielding. That’s where the local Mutual Aid Group came in. The first volunteer, a young lad, was turned back at the post office because he couldn’t describe the contents of the package to the postmaster. The second volunteer was the wonderful actor Julie Hesmondalgh.

Things were progressing well with the book until the summer. Then sad news – Sheila’s nephew was in hospital because his cancer had returned. Kevin had been like a son to Sheila, who doesn’t have children of her own. He died about a month later, and Sheila was devastated. There was now a funeral to help organise. The life story project was put on hold for six weeks.

But, we’d come too far to give up now. We picked it up and brought the story to the point we’d planned to end it at, with the death of Sheila’s mother. And eventually, at the end of the second lockdown, we managed to complete ‘Me and Me Mam’.

An excerpt from Sheila's memoir

My mother was a good woman, and she had a big effect on me. She taught me the basics of life, the principles. She was a very hard-working woman, and I think I too have worked hard in my life. I got this from my mother because I saw her working all day then, when I was lying in bed at night, I’d hear her on the sewing machine making things for other people to make ends meet.

I think of my mother often. My sister-in-law once said, “You’re very much like your mother, Sheila,” and I took this as a compliment. I believe I look like her now. When I look in the mirror, I can see my mother, with my grey hair at the age I am now. I also have her eyes, her nose, her mouth, the whole face, I think. I once caught sight of my hands in the mirror, and it took me aback because they looked just like my mother’s hands. I used to ring my mother every night when I was married, and one thing she said stuck in my mind: “Be careful of your hands, Sheila.” But she was right because you use your hands for so many things and you don’t realise how precious they are. It’s a simple thing, but you use your hands for everything.

In my mother’s kitchen, she always had a good stock of loose tea, packets and packets of it, which was a habit that came from the war years, so she wouldn’t ever be without. I think a little of that has rubbed off on me because there are certain things I like to have two of in the cupboard, and I like spare butter I can put in the freezer. I think that habit came from my mother, being careful and not wanting to run out of anything.

A lasting effect my mother has had on me is being sincere. I learned a lot from her about how to live your life the right way. She didn’t suffer fools gladly and she was a very honest person herself. But I’d like to think I’ve got the same principles as my mother, and I’m honest and I support people with acts of kindness like she used to do.

My life has been very different to my mother’s. I had the chance to express myself more than she did in my chosen career, but really it was she who gave me the chance to do that. She would have been better off if I’d started work earlier, but she let me go to junior art college.  And if there’s one thing that I most want to thank her for, it’s this.