Stockport by Gaslight by Harry Littlewood 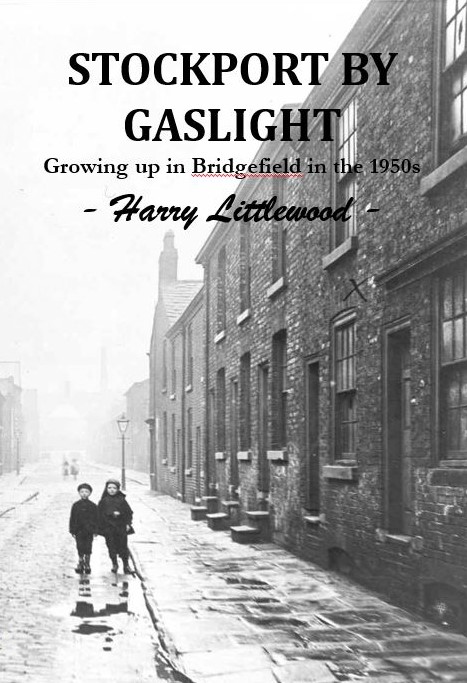 What Harry's daughter said after reading his memoir...

“I’ve read most of the book and it’s perfect…just perfect! It looks great.”

“Let’s go ahead and get it printed. Let’s get this done for dad.”

“Thanks for what you have done so far.”

What the local paper said

Harry grew up in the Bridgefield area of the town and his daughter said he wanted people to remember what life was like back then.

“All he wanted to do was keep the history and memory of what things were like alive. It would be nice for people to hand down this book to their grandchildren and say this is what life was like back then. Dad writes about what they did for food, how they used to heat their houses, what they did for work, basically what life was like for everybody at that time living on those streets, and the sense of community he got from everybody that lived round there.”

Harry, who passed away in 2019 from hospital-acquired pneumonia at the age of 71 after suffering from chronic obstructive pulmonary disease. An avid writer, Harry was always posting memories on social media and when he passed away his daughter found 700 Word documents of stories on his laptop.

“He used to spend days and hours in hospital writing,” she said. “We brought him a laptop and he would write from his hospital bed. A lot of the writing he did from hospital ended up in the book. He had a knack of writing, my dad. He could write about a kettle and a toaster and you’d find it quite intriguing reading about it.” She said it was emotional for her to read her father’s writing after he passed away and said it gave her an insight into what he was like as a child.

How I wrote Harry's memoir

Harry’s writing caught my eye when I came across one of his posts on Memories of Stockport, the Facebook page. I was really impressed with the details he could remember and the emotional way he expressed himself. His subject was the area of Stockport that was demolished in the slum clearance of the 1960s. His posts were all really moving, and I wasn’t the only one who thought so. Harry had hundreds of loyal followers. And several of them had asked him to write a book.

When I contacted Harry and asked if he’d like me to edit his posts, he was very interested. It turned out, however, that this was going to be quite a big job. Harry had posted over forty times over the years, but sometimes he’d reused an older piece of writing, only with new edits and new material. The challenge was to remove all the repetitions.

I also wanted to make the writing flow more smoothly. In the end I rearranged it all and gave each chapter a different theme. Harry only wrote about his life up to the age of ten, and there isn’t really a narrative to it. It’s a very descriptive style.

And then, sadly, Harry died. He’d been ill for several years and his family were devastated. A year later, Harry’s daughter asked me to finish editing the book so it could be shared with the world. Harry still had many followers on Facebook who were interested in buying a copy.

To date, ‘Stockport by Gaslight’ has sold 150 copies, and it isn’t even in the bookshops yet.

An excerpt from Harry's memoir

Many is the time I look back thinking how we managed in the conditions of the slums of Stockport in the 1950s. But when you consider things, it really wasn’t as bad as some saw it. I for one loved the slums. I didn’t know anything else. It was cosy and everybody spoke to you. They shared what bit they had with you, and they’d lend you anything if they had it. They’d even give you their last crust of bread.

I was born in the midst of the smoky, black, crumbling, polluted mill town called Stockport. Soot-blackened smokestacks from the factories and cotton mills raked the skyline, each belching out clouds of obnoxious fumes and gases, adding to the pollution that killed many hundreds of people. The polluted River Mersey also gave off its obnoxious odour as you walked along the old Mersey Way before the shopping centre was built.

On cold damp days, a thick blanket of this foul-smelling polluted air, called smog, would descend from above and darken the streets of Stockport. Visibility was so poor at times you could see no further than two paces in front of you. The smog was affectionately known as a ‘pea souper’ because it was thick and had a yellowish-green tinge to it. Black soot particles could be seen floating around in it, so covering the mouth was a must. We had to cover our mouths and noses with a scarf when we went out, and by the time we got to school or wherever we were going, the part where we drew breath through was covered in black slimy globules of soot.

I remember only too well walking the smog-filled streets over half a century ago. The year 1952 was the worst anybody had ever seen. The smog was the result of the huge number of coal-burning fires. That was the year it killed many thousands of people up and down the country. But it was also the turning point when the government decided to put an end to this environmental disaster by instigating the Clean Air Act.