We Did Our Best by Alf Churchouse 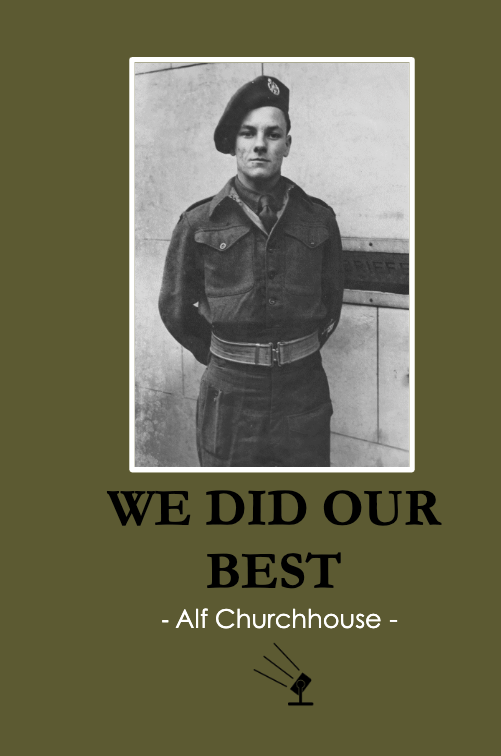 How I wrote Alf's memoir

When Alf’s nephew asked me to help his Uncle Alf write his memoirs, I knew to expect an interesting story. Alf was 95 years old and had seen active service in the Second World War. This was a chance to get an eyewitness account of the crossing of the Rhine and the taking of Hamburg in 1945, working in camps for displaced persons, and celebrating VE Day. Not only that but Alf was obviously a very articulate man, who could tell a good story.

Apart from listening to Alf’s war stories, I also heard about his early days in the slums of Manchester, right through to his later career as a civil servant in Whitehall. It was all told with both pathos and good humour.

Because Alf’s vision was impaired, I had to read the first draft of the book aloud to him to check it. When I scanned his photos, he had to look at them through a magnifying glass to identify the people in them. But we managed.

Unlike with most of my other clients, I scanned Alf’s photos at the start of the project. I’m glad I did because by the time we got to the last interview the coronavirus pandemic had broken out, and Alf was in self isolation at his nephew’s house. We concluded the project over the phone.

Luckily the books were delivered in time for Alf to see them.

What Alf's niece said after reading his memoir...

“I really liked how you put it all in chronological order. I’d heard lots of the stories before,  but I didn’t know what order they went in.

I wasn’t expecting to like the book. I was prepared not to like it. But I did. It gives a real flavour of Alf. I like how you made it sound like Alf’s voice.

I’m so glad we did this when we did. Alf has deteriorated since you finished interviewing him. Thank you.”

What Alf said after reading his memoir...

“Everybody who has been exposed to the book has had nothing but praise for it.”

An excerpt from Alf's memoir

As soon as the engineers declared that the bridge was tight at each side, we were ready to cross the Rhine. There were relays of motorcyclists in front of us and when we crossed, sometime in the afternoon, there were with us these two Bren gun carriers packed full of infantry and behind them came the colonel, then the adjutant, then me.

We were in our three-ton truck, with all our equipment and our radio. Radio sets like the one I had were quite good at picking up long-range stations. But they were all big things. However, that didn’t take up all the space in a three-ton truck, which was the general size for British trucks.  At a push, you’d get about 15 men in one of them, but they were always pushed, and they were always short of space. We also had to carry a load of bedding and all sorts of stuff for some group at headquarters in our truck, so I had to find a place where I could sit, because they just used to pile this stuff up like bonfire wood.  No provision was made for me, except that I had to have an aerial welded onto the side of the truck. I sat inside this thing, which had no windows in it, so once I was inside I couldn’t see out at all. The Americans had been shocked when they saw the state of our trucks and jeeps. They insisted on giving us new ones, and at the end of the war some of them were still only a month old.

The truck had a little hole in the roof where I could stand up, and now and again I’d put my head through the roof looking a little like Rommel, with my goggles on and a tin hat that came round my ears and a speaker on my mouth. I had a rifle, full of bullets this time, and I had pockets filled with bullets. I nodded to all the engineers, although they didn’t know who I was. They were down below while I was up in the air on the top of the pontoon. Three-ton truck wheels are high up, and you’ve got to stand on top of this seat and stick your head out so you’re even further up. I couldn’t see what was below me, and all I could see was the pontoon sticking out where I was. The angle at which I was looking at the river became a bit acute, so by the time I got to the middle of the river I could hardly see what was going on. In the end, I was so horrified that I put my head back in and got inside the back of the truck.

In addition to the forward movement to the other bank, these bridges wobbled a bit, particularly when you got in the middle of the river. We thought we were going to sink. There was an up-and-down motion, and a tendency to slide.  Now, the bridges were always under tension because the Rhine is a fast-flowing river, so the surface tension was pushing the bridge towards the coast and that meant that there was an arc on the pontoon bridge. Some of these pontoons would be straining like mad and they wanted to make this arc – but we wanted it as straight as possible!  When you didn’t go straight across, the bridge wobbled, particularly as the weight got on it. You tried to get everything going across the bridge as fast as you could, but the trucks made it go a bit lower because of the weight going over with them, and we were nowhere near the heaviest weight.

The heaviest weight was these searchlights, which were massive. And then, of course, we’d got a radar set, which in the old days didn’t have a transmitter or these little chips that we have now, but had valves which needed to be protected. So this great iron thing came across, with all this lot stuck in it, and the radar blokes messing about with it all of the time. The radars were always going wrong because the technology was only in its infancy really. We maybe should have waited a couple of years for the war, because we’d have done better!  However, the Yanks would still have been yelling out, ‘What’s your name?’

I was quite happy to get to the other side, I must say. When we finally crossed the Rhine, I expected everybody, all the Jerries, to be there with their rifles, doing their best to see us off.  It didn’t work like that though. I don’t know where the Jerries were, but when we crossed the Rhine I didn’t see a soul.  They must have retreated into Germany. Before we’d crossed the Rhine, there’d been a parachute drop, a heavy-weight parachute drop, with 16,000 American and British parachutists dropped across the Rhine. It was called Operation Varsity and was the largest airborne operation in history, on a single day. So by the time we came across, there were very few German troops left to guard the bridge

Then I turned on the radio, but instead of receiving messages with encouragement from the Americans or whatever, all that I could get was ‘Chattanooga Choo Choo’ on the American forces network as I crossed the Rhine. It was the favourite tune of all the black drivers.

All the roads were now clogged with American trucks. Their radios were going full blast with ‘Chattanooga Choo Choo’ and all that. All the drivers were coloured men, because the Yanks wouldn’t let them fight until later, until they’d crossed the Rhine. They also wouldn’t allow black men to have rifles, and it was only during that period that they passed a law in the Senate and allowed all the American soldiers to fight. Up to that point, there were lines of trucks and they all had black American drivers. Whenever these trucks stopped, there were unemployed truck drivers galore. They just swamped everywhere, and they were all singing their heads off.

And that’s how we finished the war really.